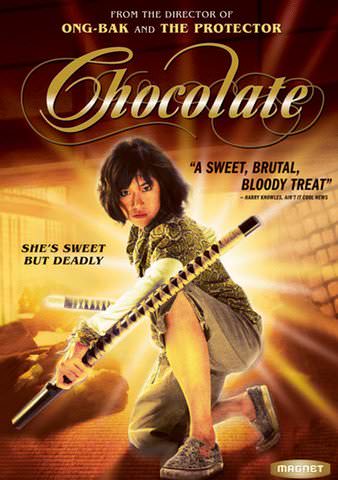 Chocolate is the perfect “acid test” to determine who are fans of action movies and who are not. How so? Let me explain. A true fan of action movies has the ability to overlook some flaws in film-making (e.g., script, acting, character development, etc.) if the action sequences are exceptional enough to make up for them. This is no different from fans of art-house dramas who can overlook minimal content if the film can portray everyday life in interesting ways. With that said, Chocolate is one of the best examples of an action movie that has such extraordinary fight sequences that they easily overpower any deficiencies in the script.

An autistic girl with martial arts skill attempts to collect on the debts of her sick mother. This movie has a mediocre script, and requires some patience from the viewer to slug through the early moments. Once the 30 minute mark arrives, however, the viewer is treated to one of the most amazing displays of asskicking by a female protagonist in the history of action cinema. Virtually all of the remaining 50 minutes is devoted to high quality choreography and bone-crunching maneuvers. The settings and scenarios change frequently, thereby avoiding any feel of repetition or monotony. This is brainless action at its very finest. JeeJa Yanin – an amazing specimen with her fluid moves and hard strikes – catapults herself into the upper echelon of female action stars with this single movie. Her punches and kicks start off rather basic, but get increasingly more complex until they peak during the jaw-dropping finale that lasts a whopping 20 minutes. Lots of fun to be had here.

Now, a snobby moviegoer will cry about the negatives without even considering the positives. Anyone who does not enjoy the action in this movie seriously needs to get their pulse checked, or at least schedule for a re-alignment of their action movie tastes. There’s nothing more scintillating than watching a cute girl kick the living hell out of hundreds (quite literally) of stuntmen in a variety of environments. Basically, if you’re not entertained by this, you’re not a fan of action movies. (You probably didn’t like So Close or Azumi either, right?) Stop fooling yourself and go watch another Tsai Ming-liang film.

Some critics have claimed that this movie “ripped off” other movies. It didn’t. There are a few homages that last a few minutes at most (a few Bruce Lee references, a locker scene reminiscent of Jackie Chan, and some footage from Tony Jaa’s movies). These few scenes are only a drop in the bucket, because 95% of the action is independent of any references to other movies. The sign-post battle on the apartment complex balconies is one glaring example of a completely novel (and breathtaking) sequence that pays homage to no one but itself.

This is definitely worth a blind buy. True fans of martial arts mayhem will end up re-watching the action scenes about a thousand times. 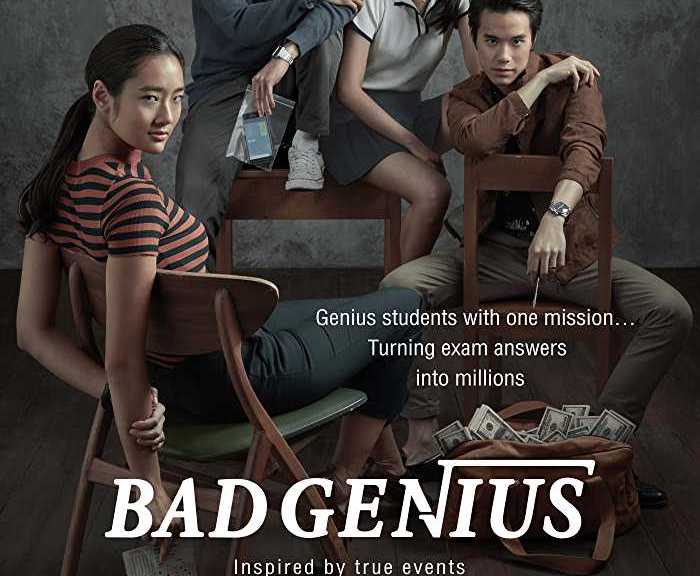 Chutimon Chuengcharoensukying – Caring and matured performance. Bright future ahead
Eisaya Hosuwan – One of the most cutest performance. Hollywood on it’s way for you!
Teeradon Supapunpinyo – Natural performer
Chanon Santinatornkul – Reality at it’s best!
Others – Well done
Story – Lynn, a high school student who profits by conning tests, gets a chance to take a test that leads her to set foot on Sydney, Australia. Keeping in mind the end goal to finish the millions-Baht assignment, Lynn and her schoolmates need to complete the worldwide STIC(SAT) exam and convey the appropriate responses back to her companions in Thailand before the exam happens by and by in her nation of origin.
Cinematography – Excellent
Screenplay – Involving
Direction – Promising
Bad Genius (2017) – One of the best movie of the recent times. Asian movies are already in the international recognition list. Countries like Korea, India, Japan, Hong Kong, Indonesia are coming with some of the best movies and Thai movies also joining the list. Some of the thai movies to be remembered are Tony Jaa’s Ong bak, Teacher’s diary etc. This is a special movie because of the choice of casting, they are cute and smart.  Special thanks to sound team for making each scenes thrilling. It has great story, great importance of fellowship, family and it offer you amiableness as well. It is a film made with genuine and closeness. Must watch!